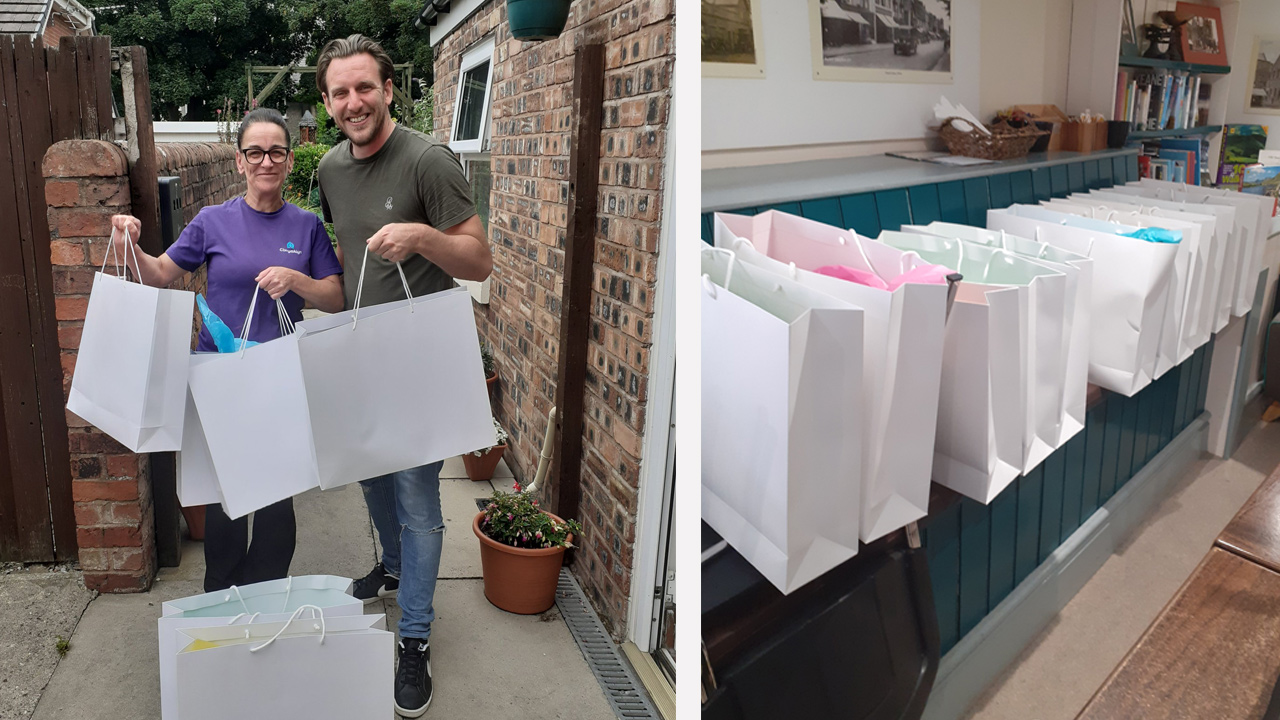 Our blog series, The View From, explores how housing associations have been responding to the Covid-19 crisis. In this blog, Louise Blackwell, Community Development Officer at ClwydAlyn, and Stuart Hughes, Resident Involvement Officer at ClwydAlyn, discuss how the crisis has enhanced their appreciation for the local voluntary sector and brought them closer to their residents

ClwydAlyn set up a new wellbeing team to support our most vulnerable residents towards the end of March. We have stock across seven counties in North Wales and we quickly realised that many of our residents were vulnerable.

The new wellbeing team did some initial mapping to find out what kind of local community support already existed in the different counties where we operated to avoid duplicating work. Then we started calling residents, offering them emotional and practical support and signposting them to specialist support services. Some residents have requested regular wellbeing calls, so we check in on them weekly or fortnightly, depending on what their wants and needs are.

In the first months especially, many people across the organisation got deployed to different roles. With the welfare calls, staff who would normally be working in different areas of the company helped out, even some people who were self-isolating since the calls could be done from home. We’ve made a total of 1,925 wellbeing calls as of July 13.

Many residents we contacted were just pleased to know that ClwydAlyn were there in case of an emergency. It was reassuring to know that if their son or daughter who goes shopping for them gets ill, we would be there as back-up. Our team at ClwydAlyn helped by collecting shopping and picking up prescriptions for residents who couldn’t leave their homes, and when needed signposting them to other services for more specialist help.

Other residents who lived on their own, were elderly, or were having to shield or self-isolate and who didn’t have family and friends around, required more support. Initially quite a few residents needed practical support with things like food interventions, information on what they were entitled to and how to get it. For others it was letting them know about what local community voluntary groups existed that could help them. For the people we’ve called who have been in crisis, we’ve signposted where we can, letting them know about excellent services like New Mind or the mental health helpline for Wales.

We know that it’s been a difficult time for our residents, which is why we’ve recently launched a new wellbeing project where we deliver wellbeing packs full of exciting freebies to our residents. These packs are themed to give residents a choice of content; we’ve got one for physical exercise containing weights, a yoga matt and a water bottle, another pack for gardening containing seeds for vegetables and flowers, and a mindfulness pack containing a colouring book for adults, pens and pencils. We’ve added another one today for baking.

We’ve even got an indoor pack for people who don’t have big gardens or are housebound, which includes a bonsai tree, and patio containers. The packs are about promoting physical and/or mental health and wellbeing, and encouraging people to get out into their gardens, enjoy the fresh air and get exercise.

The packs are inspired by Anglesey council, who were doing a similar project that concentrated on gardening and the outdoors. Some of our staff who were furloughed within our asset management maintenance team helped deliver those kits. ClwydAlyn thought it was really good practice, so after helping Anglesey with their project we made the decision to take it on and extend it. As well as ClwydAlyn funding it, another one of our contractors, Travis Perkins, have given us match funding which has given us a bigger budget.

When we’re doing the welfare calls now, we promote the packs to people we’ve been supporting for the last few months who we know are particularly vulnerable. We launched about a week ago and we’ve delivered around 80 so far. We’ve also been liaising with our colleagues to invite them, if they’re happy and work in different patches, to help with the delivery of the packs. And we’ve had lots of uptake.

This has enabled people from other parts of the organisation to take ownership of the project. For example, two housing officers helped out yesterday and it was a chance for them to be seen in their community and have a chat with residents, rather than just going to sort out maintenance or anti-social behaviour. They’ve fed back how much it has helped them build rapport and trust with the community.

One thing that’s happened since the start of lockdown has been an increased recognition of the great work that’s being done elsewhere in the community. Rather than siloed working, we’re increasingly signposting residents to other community groups who can help them with specific needs.

Smaller local community groups have been amazing and were very quick at identifying local need. The local authorities set up weekly food parcels but even then, you often had to wait a week. Whereas some of these local community support groups which have minimal funding ensured that there was always an emergency food parcel available. There’s definitely been more interest, understanding and awareness about some of the other great services that exist alongside the more visible ones.

Going forward we’ll be moving more of our meetings and services online which hopefully will attract younger families who aren’t always able to make face-to-face meeting because of work commitments. Through consultation exercises on social media and the internet, there’s a lot of work going on to finding out what works for our residents and how we might do it better.

In terms of digital inclusion, we’ve also been getting requests from residents for tablets and mobile phones, some of which we’ve been able to fund. At a supported living scheme for young people in Wrexham we donated a couple of devices, so residents were able to keep in touch with family and friends, and similarly at an extra care facility in Anglesey.

We’ll be continuing to look after the wellbeing of our residents better and intervening as early as we can. Working towards a policy of no evictions is a big part of that. ClwydAlyn is taking an early intervention approach, aiming to ensure our residents have all the support they need, in order to successfully sustain their tenancies.