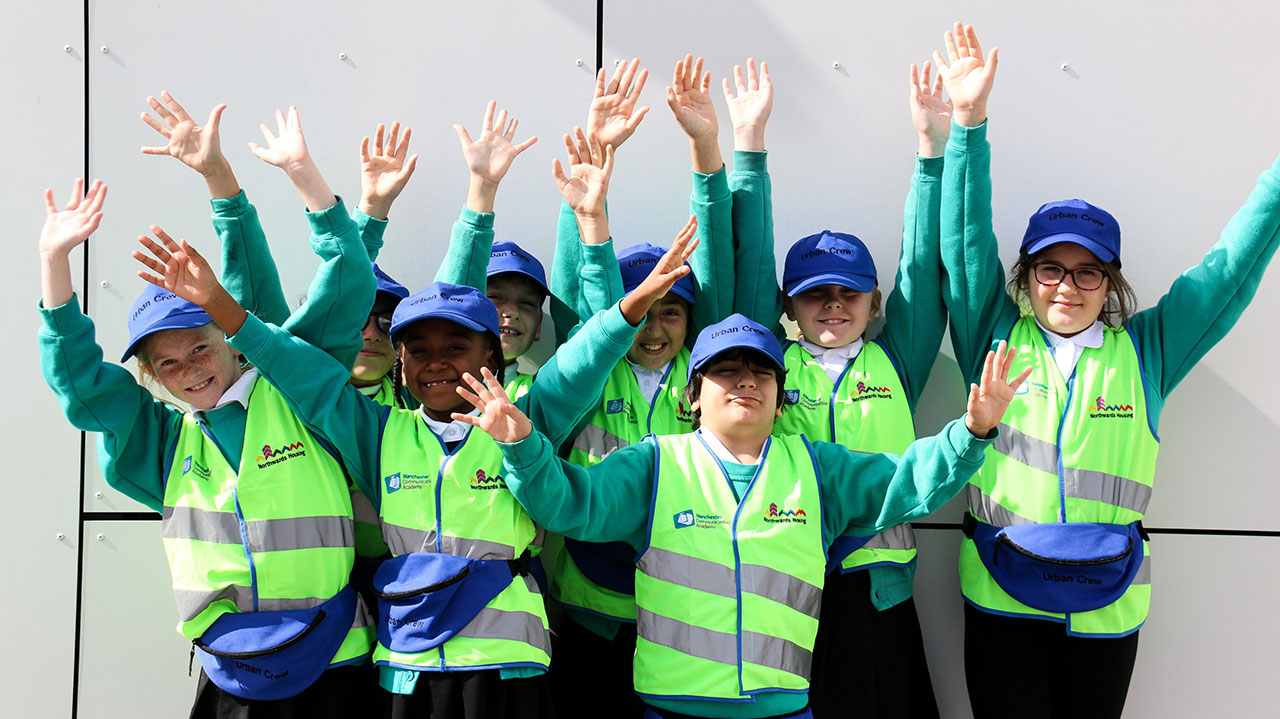 Some might be top of their class, or underachievers. Others might be naughty, or particularly shy. What distinguishes the Urban Crew is it’s “open to everyone”.

Ian Gillett, the Urban Crew Project Coordinator, explains how the project brings school children together with the aim of encouraging them to take more responsibility for their environment. The project, launched with nine schools in 2011, is a joint initiative between Manchester Communication Academy and Northwards Housing. Fourteen primary schools in North and East Manchester have now signed up to the scheme, with eight to twelve children from each school taking part every year.

Each school has an Urban Crew, who are kitted out in high-vis jackets and blue caps. A nominated Urban Crew Facilitator oversees the daily running of each crew. Their role on campus is to switch off lights, turn off taps, pick up coats and litter that has been left on the floor, and report hazards such as broken glass. They also keep an eye out for any children who are on their own, acting as the eyes and ears of the school community.

Teachers have noticed how participating in the crew has been “empowering” for the children, improving confidence and self-esteem. OFTSED reports have been similarly positive, singling out the Urban Crew project as an example of positive engagement with young people. Participation also gives each child taking part an ASDAN accreditation.

As well as promoting health and safety awareness, the project also promotes good citizenship by connecting schools with the 18 sheltered accommodation blocks that Northwards Housing manages. Children are given the opportunity to visit their nearest elderly residential home, where they take part in inter-generational activities, taking games to play, serving tea and coffee and, at Christmas, taking part in carol-singing.

The visits “make the children more aware of who lives around them,” says Ian. Since the Urban Crew project began there has been a reduction in anti-social behaviour towards the sheltered accommodation blocks and those who live in them. The children now realise that the buildings are people’s homes, while the elderly residents, who were once intimidated by the young people, feel connected and sympathetic to them.

“The project allows us to build this bridge at an early stage,” says Ian, “giving the children a respect for their community, pride in their surrounding environment and understanding of good citizenship.” The project continues to reap benefits even after the children have left school, because, as Ian explains, “these are our tenant’s children and many of them will be our future tenants.”

Children and young people are often seen as a low priority in discussions about community investment. However, when we regard them as future tenants, how we engage with them and build bridges between generations becomes of central importance to the long-term sustainability of thriving and connected communities.

If you would like more information on the Urban Crew project please contact Ian Gillett at Ian.Gillett@northwardshousing.co.uk.

For more information on how your housing association can demonstrate your commitment to community investment, read about our Board Charter or email Adam Chester at Adam.Chester@hact.org.uk.